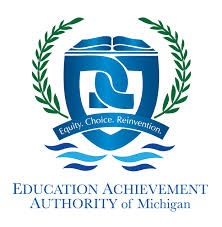 Department of Education moved to end it's exclusive agreement with the takeover district.

Now, the MDE has authority to take control of struggling schools through the State School Reform/Redesign District (SSRRD).  In November of 2011, the state signed an agreement with the EAA which gave the EAA the exclusive authority to operate schools referred to the SSRRD.  Tuesday State Superintendent Mike Flanagan started the process to end that agreement:


Flanagan gave formal notice to EAA Chancellor John Covington in a letter dated Tuesday, saying the state would be dissolving the agreement in one year. The provision to give notice is required under terms of the contract.

"In our need to have options in which to place persistently low-performing schools, in addition to the EAA, we need to end the exclusivity provision of the agreement between the EAA and the state," Flanagan's letter states. [MLive.com, February 19, 2014.]


"The basic premise of the EAA teaching model is flawed. Putting mostly new, inexperienced teachers in schools whose students have had difficulty learning is not working. While the use of computers in teaching can be very effective, it is only if the teacher in the classroom is fully engaged with the students. Students learn best when they have positive relationships with their teachers," the board members said. [MLive.com, February 18, 2014]

Nonetheless, the current legislative majority may push through a vote to expand the EAA.  Stay tuned and contact you legislator to let them know you oppose EAA expansion.
Posted by Unknown at 8:06 PM